One week has passed since the 2022 Champions League final. Like any other grand finale, it was an occasion that should have brought the curtain down on another extraordinary season of European football.

But by now, the fleeting images of Vinicius Junior peeling away at the back post to fire Federico Valverde’s cross home and hand Real Madrid their 14th European triumph, are no more than a distant, forgettable side-plot to an evening that was was filled with injuries, trauma and police brutality. Experiences that will be forever embedded in the minds of the thousands of fans who attended the Stade de France.

In the week since the chaos unfolded in Saint-Denis, a town in the northern suburb of the French capital, there has been an astonishing amount of finger-pointing from French ministers eager to quickly push their fabricated narratives of what they ‘believe’ into mainstream circulation.

France’s Interior Minister, Gerald Darmanin, was one whose voice was quick to make headlines around the world as he spoke in the Senate on Tuesday, detailing his recollection of events from the weekend, that unsurprisingly differ to Liverpool fans This Is Anfield spoke to.

For 19-year-old Calum Caulfield, who was attending his first European final with the Reds, the threats of what was to occur outside France’s national stadium become real and obvious from the moment he arrived off the Metro, due to the lack of communication between officials and supporters.

“Once we got off the metro at about 18:45 (local time), we then followed the crowd and made our way to the Stade De France,” he recalls.

“I could tell it was badly organised before going through the first checkpoint as there was no signs telling us where to go, we just had to follow the crowd.”

He – like thousands of other supporters who had forked out an extortionate amount of money for a ticket – headed to turnstile Y. It was there where he met a backlog of fans being treated inhumanly for trying to enter the showpiece event inside a stadium that they had paid hard-earned cash for access to.

Passing past the first checkpoint at just after 19:10 – just under two hours before the originally scheduled kick-off time – Caulfield noted the heavy-handedness of the French police when Liverpool supporters – patiently aligned near his turnstile – made a hasty rush away from the steel gates as pepper-spray was fired into the crowd, for an unknown reason.

“I then got the tear gas in my face, along with the other two people I was with,” he explains. “One [eye] couldn’t see for 15 minutes; I still had the taste of tear gas in my mouth up until Tuesday. After everyone calmed down, there was a Mum and son in front of me who were in shock and upset.”

For Matty Johnson, who was part of the same travelling entourage as Calum, his experience of his third Champions League final will be one that stays with him for life. Having spent the early hours of the afternoon soaking up the Parisian culture in Bistrot Des Martyrs , he describes the atmosphere around the place as one that was for the part “booming.”

Later that afternoon, as he and his friends departed the Garde du Nord, Johnson explained how there was no animosity between supporters of both teams, despite the enormous prize at stake, with jokes being exchanged about the Spaniards’ failed attempt to sign Kylian Mbappe.

Though, that was to change when he, alongside thousands of other supporters, reached the region of Saint-Denis. It was there where they would instantly be greeted by fierce-looking riot police, which he says immediately heightened the tension around the place.

“We had our tickets checked on the first entry point outside the ground,” he explains. “This was in a tiny bottleneck the size of a turnstile, where two riot vans had blocked the road.

“Here, tickets were checked for authenticity, and we were in [the perimeter]. Noticeably those who weren’t let in were the locals – who were trying everything in their power to get in, despite not having tickets. By this point it’s around 19:45, and we thought the worst of the evening had been and gone .It wasn’t.”

Johnson and his mates headed up to turnstile Z and it was here where any grasp of control the authorities had on this event would be lost, as innocent supporters were padlocked out of the Stade de France’s vicinity as the gates were unexplainably shut – 90 minutes before the kick-off. 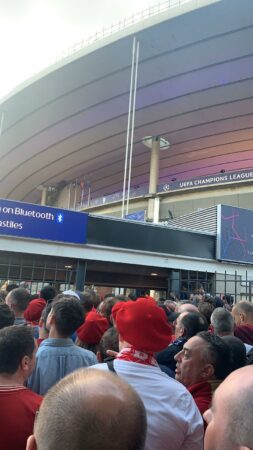 Johnson explains how tragic the outcome of the barbaric policing methods that were implemented on the night could have had far graver consequences if it wasn’t for the exemplary behaviour of the Liverpool supporters he was surrounded by.

“A mini crush as the Liverpool fans – who were waiting patiently to get in – were being pushed up against the fences and gates,” he recounts.

“The police on the other side of the fence used pepper spray and tear gas to try and get them to move, but they simply couldn’t, and men women and children had to stand there and take it.

“The most important thing about Saturday was, despite the game approaching quickly with You’ll Never Walk Alone being played at around 20:40, Liverpool fans didn’t panic. Nobody started pushing. Had this been done it could’ve been a a lot worse.”

And Johnson’s comments about the excellent behaviour of himself and his fellow supporters is something that should be making the headlines across the continent at the moment, not Amelie Oudea-Castera and Darmanin’s relentless lies at the French Senate, where they failed to mention the trouble supporters had faced when trying to navigate their way out of the stadium’s perimeter.

One fan who witnessed the shocking post-match scenes unfold was Oliver Miller, who was quick to lambast the lack of safety protocols on hand after the game, with some supporters not getting out of the ground until midnight.

“The organisation wasn’t better after the game,” Miller says.

“The police presence was minimal, exit gates were closed and there were accounts of muggings and threatening manoeuvres by locals as supporters made their way back to the train station.

“On arrival at Gare du Nord in central Paris, I encountered a Liverpool supporter who had just been jumped by a local gang and seen his mobile phone snatched by one of them. He was one of numerous supporters who were either pick-pocketed or threatened at the station as a sinister atmosphere took hold.”

On Friday afternoon, European Football’s Governing Body, UEFA, did direct an apology toward Real Madrid and Liverpool supporters, and it has been announced that an independent review of the events will take place.

But for now, there is plenty of work to be done to ensure that the mistreatment of football fans ends here, and no one has to experience what the likes of Miller, Johnson and Caulfield had to on Saturday evening.

Football has long left its dark ages of hooliganism behind, but it seems those in power are still as desperate to use their heavy-handed operations from the same era, despite the socio-economic of football matches evolving in the forty years since Britain’s dark age .