With niggling injuries behind him, Jordan Henderson put together the most appearances in a single season for Liverpool, and yet there are question marks over what comes next.

The Liverpool captain was able to dust off his trophy shuffle this season having held both the League Cup and FA Cup aloft, to complete the set under Jurgen Klopp and add to his legend.

He, and his teammates, came so close to creating further history and on an individual level, Henderson, off the back of a new four-year contract, played a significant role.

At 31, Henderson’s game has changed and evolved and he is a player who often finds himself under the microscope with his performances not always proving as consistent as the minutes he was handed.

With 11 seasons now under his belt at Liverpool, his last returned the most appearances (57) of any that came before, having managed to avoid niggling injuries that have plagued him in recent seasons.

Being closer to the end of his career than the start of it, it’s a significant success that Henderson will hang his hat on, with availability always to be a player’s greatest asset.

“Physically, I think again my numbers probably speak for themselves this season,” Henderson said of his fitness prior to the Champions League final.

“Mo’s given us a few tips on recovery which I’ve learned from. It’s helped us a lot.

“I’ve been really fresh for the majority of the season, it’s probably the most I’ve ever played, number of games-wise, I think including internationals maybe over 60.

“That’s pretty special for me, especially when you get into your 30s and people start questioning if you’re getting too old all the time. It’s nice to put out those numbers and perform as well.”

Liverpool’s management of Henderson, no doubt, proved significant in enabling the 31-year-old to amass 3,876 minutes across the season, having been substituted off the pitch 22 out of his 43 starts. 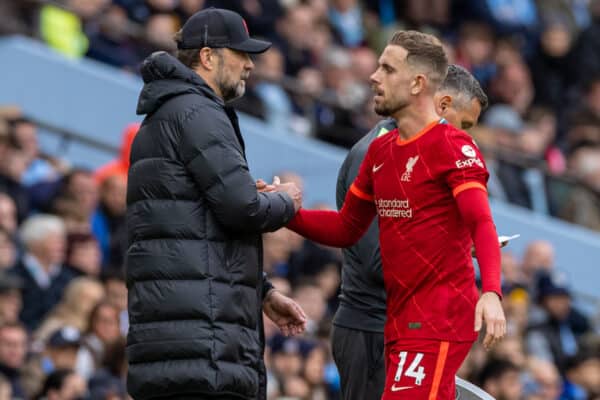 And that careful management was seen from the off when the captain had to miss the opener at Norwich having had his pre-season compromised by England’s run to the Euro 2020 final.

From there on out, he would miss only a five further games in the next 62 for Liverpool, with Klopp readily relying on his captain amid his luxury of choice in midfield options.

The Champions League did prove an exception to that rule, however, with four successive starts from the bench, sitting either side of the trip to AC Milan where he was omitted entirely for a rest.

Fabinho and Thiago are two of the first names on the teamsheet, leaving plenty of competition for the final midfield role, with Naby Keita, Harvey Elliott and Curtis Jones among those in the frame.

But that again brought to the fore a question of which position best suits Henderson, the No. 6 or No. 8 role?

The right-sided midfield role or the deep-lying No. 6, where does Henderson best fit?

It’s a question readily debated and discussed, and the captain had plenty of minutes in both positions to add to either side of the conversation.

As the right-sided No. 8, Henderson brought to the fore eye-catching performances, his display at Everton an inspired one that started with a sublime strike for the opener before playing a perfectly-weighted ball from which Mohamed Salah duly finished.

The Champions League meeting with AC Milan was another such example of his finishing capabilities, his desire to make smart third-man runs and drive at the defence.

On the flip side of the coin, his showings at Brentford, Leicester and Burnley, in particular, were disjointed on the right, often becoming too ball attentive and easily dragged out of position.

It’s the control element and the wasted passing opportunities that can frustrate, with Henderson’s best assets not always coming to the fore in what is a key midfield role.

It’s a position he is afforded more freedom in, with Fabinho holding down the fort with Thiago typically by his side as does so.

But when Fabinho is injured or in need of rotation, Henderson’s ability to drop into the No. 6 is a string to his bow that is invaluable for Klopp.

Controlling the game from the deepest midfield position has conjured up some of Henderson’s most consistent performances, utilising his desire to raise the tempo and see the whole pitch.

At Man United, he was able to dictate play, enjoyed a 96 percent pass success rate and set up Salah once more with a superb pass with the outside of his boot, a complete showing. 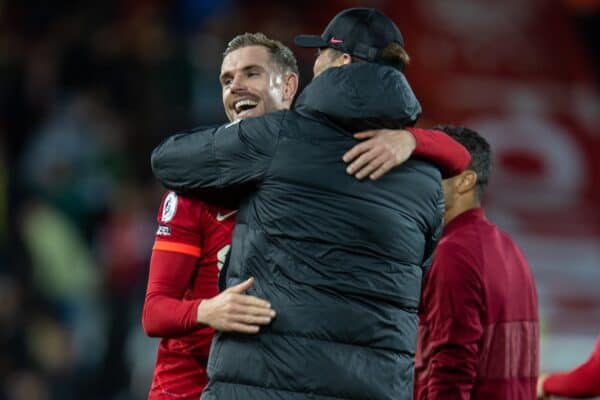 It was a position he was deployed in on over 15 occasions throughout the season, but notably against sides considerably further down the table, and the Reds dropped points in only one of these games – that being that Brighton draw.

It’s a position that requires more tactical discipline and nous, awareness that the No. 8 role will have opened his eyes to in addition to watching Fabinho, who he says is “the best in the world in that position.”

Henderson can be progressive and assured in the No. 6 position and that Fabinho’s injury absence was not entirely felt during the captain’s time in the role spoke volumes of his performances. 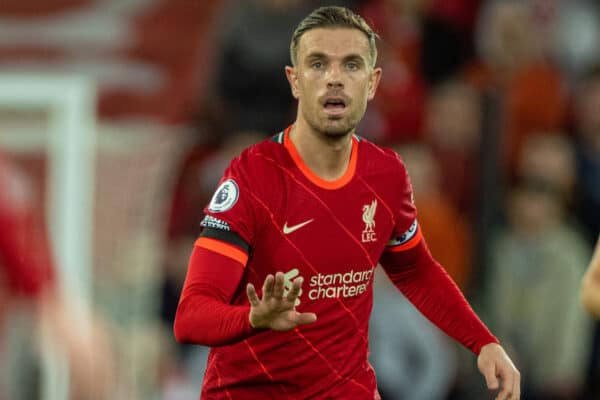 It’s an interesting point to ponder, especially after the signing of Darwin Nunez that could see Klopp shift his formation to a 4-2-3-1.

It could certainly negate adding another midfielder to the ranks this summer, with the need, therefore, not as great with the options already at Klopp’s disposal.

Henderson’s position is secure with a contract signed at the start of last season, but he is not to be without competition as Naby Keita finds his stride, Elliott continues to grow, as too Jones.

A full summer off after Gareth Southgate took his efforts throughout the season into account will hold him in good stead for another consistent year, but you feel Klopp may reduce his reliance on his captain.

He will still accumulate copious amounts of minutes and games, fitness permitting, but the FA Cup semi-final against Man City and the Champions League semi-final at Villarreal showed he’s not always to be at the heart of midfield.

The combination of Fabinho, Thiago and Naby Keita is readily desired and if Klopp does opt for a double pivot, the scene changes once more for the 31-year-old.

Best moment: His performance at Goodison was an inspired one, with a goal and an assist showing off his very best – a strong mention for his Old Trafford assist.

Worst moment: The trip to Burnley is hard to look beyond, continually losing possession, misplacing passes and then making a tackle that got him booked and injured at the same time.

Role next season: A consistent presence in midfield but with a potential drop in minutes due to no longer being a starter each and every week.